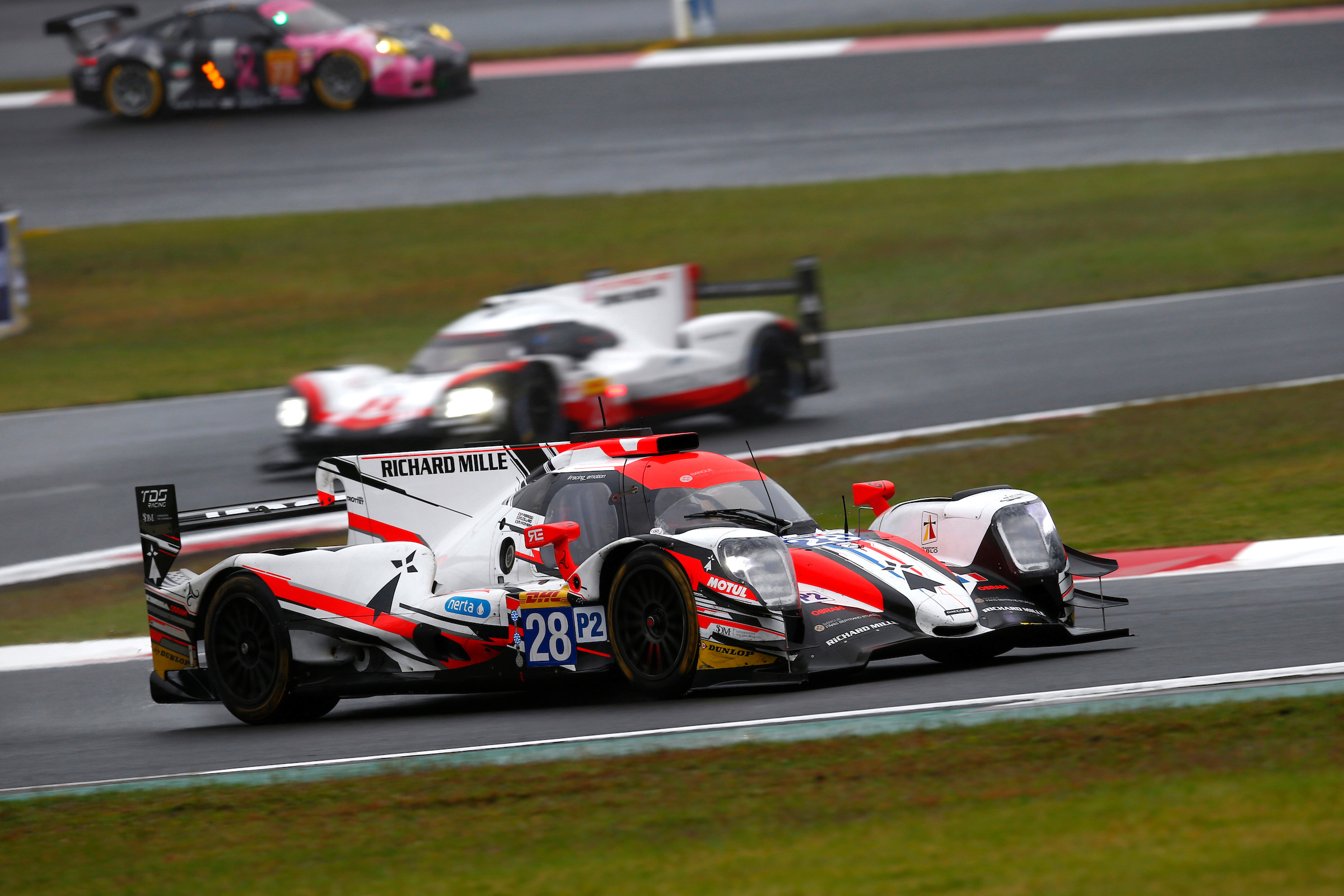 The Fuji International Speedway, well known for its very special weather conditions, was the scenery of the 7th round of the WEC Endurance Championship this weekend. This year was another demonstration of what Mount Fuji can offer, in fact, fog and rain were part of the game all along the race weekend.

For the French trio François Perrodo, Matthieu Vaxivière and Emmanuel Collard, the Speedway is synonym to great memories as it is right here, three years ago in 2014, that they reached their first podium all together. Thus, they made it to Japan with the idea to renew this experience, but the weather decided it to be for another day, even though the podium was near.

As soon as in the first free practice session on Friday, #28 Oreca 07 TDS Racing set the second fastest time, a result in accordance with the motivation of the French trio. With complicated weather conditions, they finished 6th and 9th of the next two sessions.  For the qualification, the team chose to have François Perrodo (Bronze driver) starting first, giving Matthieu Vaxivière (Gold) the hard task to fight with the worse weather conditions at the end of the session. They qualified 9th in the LMP2 category, putting the car on the 7th row of the starting grid.

For the first time in his WEC championship career, François Perrodo started the race at the wheel of an LMP2. With the weather being more than capricious and for obvious safety reasons, the race director decided to launch the race behind the safety car. It was only after about fifteen minutes that the lights went green, but unfortunately not for a very long time, as the visibility was becoming worse lap after lap. The safety car came out another time, until the director decided a total interruption under red flags for 20mn. Emmanuel Collard took over after the interruption did the best he could in always very complicated track conditions. At mid-race, the Oreca 07 #28 took the lead in the LMP2 classification. After several other safety cars and/or yellow and FYC flags (because of the weather or the competitors' off-roads), Matthieu Vaxivière followed in the footsteps of his teammate. It did not last very long, because the 6 Hours of Fuji were going to be stopped prematurely after a second red flag. The TDS Racing drivers finished at the bottom of the podium in 4th position with a little frustration, as they were close to the podium steps.

Xavier Combet, Team Manager: “We experienced a race of twist and turns due to the extreme weather conditions this weekend. A lot of thick fog and a very wet track forced the race director to neutralize the race several times, either with safety cars or with red flags for total race interruptions. We succeeded in making maximum use of these interruptions in our race strategy, which allowed us to keep our position in the LMP2 classification and to be able to fight for the podium. Our three drivers,  including François (Bronze) raced, which is not the case for the teams that are ahead of us. If we had been able to get back on track after the second red flag, we could have done better. That being said, I fully understand the decisions of the race director, which have been made with all the common sense that is necessary to preserve the safety of drivers and teams. What we have to remember from our Japanese weekend is that we were in the rhythm, that the car was behaving well, even in these extreme conditions, and that our drivers did not make any mistake on a very tricky track. Also to be noted, the fine performance of François who started the race for the first time and who knew how to handle the complexities of the weather.”

François Perrodo (Bronze): “This is the first time I've ever started a WEC race and further more driving a prototype car. I knew it was going to be a bit complicated because of the weather conditions, and I can confirm... it was.... I didn't get off to a very good start and ended up behind GT cars. With the rain and the water projections, it was pretty hard to manage. I did catch up with them in the fast areas, but in sector 3, I couldn't do better because they had a lot more grip than me and I wanted to keep the car on track.  But my goal was above all to get the job done, to bring the car back in a good position. The safety car at the end of my run allowed me to get back into the LMP2 field and to give Manu a car in a good condition and back in the rhythm. In conclusion, we start at the back of the LMP2 grid and finish 4th, it's not so bad and if the race had resumed, we could have made a very good result because Matthieu was very motivated and our strategy had been good.”

Emmanuel Collard (Platinum): “We worked well this weekend and overall, everything was going very well within the team and with the car. But the weather was really complicated... a lot of water on the track and very limited visibility. I still found my rhythm in these conditions, and we were in the position to fight for the podium. It was a pity not to have been able to resume the race after the second red flag, because we could have been on the podium. Anyway, safety decisions must be respected.”

Matthieu Vaxivière (Gold): “It was an astonishing race with 6 safety cars and two total red flag interruptions, because of a very bad weather. The fog was difficult to manage and the track was really wet. In the end, I didn't have the opportunity to drive a lot, and even though the drivers' safety is of course very important, I regret that I wasn't able to get back on track after the second red flag, because we had managed our strategy well, and we didn't need to stop anymore. Which means that we would have been ahead of the competitors ahead of us and thus on the podium... maybe even on the highest step. It's too bad, but it's the same conditions for everyone and now we're focusing on Shanghai in 15 days.”